Trending Now
The Basics of Starting and Running a Company
Pressure Washer Marketing Tips to Attract More Customers
How to Start A Successful Boutique
Choosing The Right Clothing Manufacturer From The Internet
How To Order Your Custom Stickers?
Points To Note When Choosing A Wholesale Hair...
What can affect the price of injection molding?
Essential PCB Services Administered by NextPCB
How To Import Christmas Decoration From China
A Guide When Buying A Video Conference Camera
Home Business Understanding how to get the Japanese swords
Business

Understanding how to get the Japanese swords 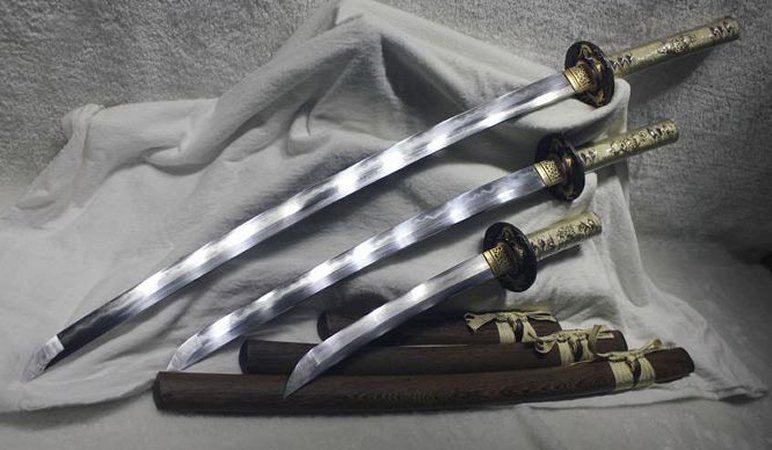 The Japanese swords have very long histories. Dating back to the 12th century and even earlier. These swords have been used by men for countless years. Swords were used for protection, for hunting and many other purposes. However, some people made use of swords a lot more than other people. Some say that the Japanese samurai goes to bed with his sword at his side. This may or may not be true, it just goes to show the importance of swords in the Japanese culture.  To the Japanese, a sword is more than just a tool of war. A sword is a way of life.

The Japanese samurai of old believed that using a sword strictly for killing randomly is a disrespect to it. A true warrior picks up his sword only when he has something to protect. To this end, the Japanese had very high standards with regards to the swords they used. In the earlier days of the samurai, an expert blacksmith crafted swords for them. These expert blacksmiths could be referred to as swordsmiths. These swordsmiths had varying degrees of reputation based on their skills.

The swordsmiths who were especially skilled, are postulated to be able to craft swords capable of piercing steel armour. The swords were so well crafted with extra attention paid to detail that many of them were popular. It was a common custom for some to inscribe names, phrases or even quotes on their swords. Fun fact, a major difference between certain types of swords is based on what side of the sword its name is inscribed upon.

How can you purchase Japanese Swords Today?

A lot of collectors share the same sentiment concerning swords crafted according to the old ways. The art of forging the swords in line with techniques employed in the earlier days is a form of cultural preservation. Not to mention that it adds a certain finesse to the swords. In this way, the crafted swords still appear as noble and aesthetically pleasing as those forged during the time of the samurai.

Today, the crafted Japanese swords can be customised to suit your requirements. (Know more here https://www.samuraiswordsmith.com ) The length of the blade, the handle, the inscriptions can all be crafted to suit you. There are a variety of available options for you concerning Japanese swords. Ranging from long swords to shorter ones. There are four most common Japanese sword types, they are the Katana, the Wakizashi, the Tachi and the Tanto. All of which are made available today by expert swordsmiths.

Factors to Consider When Choosing the Right Bed for Your Dog

How a Coffee Company Can Choose Packaging Designs